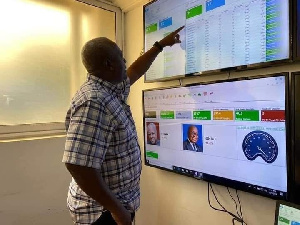 Executive Director of civil society organization, ASEPA Mensah Thompson has revealed that the opposition National Democratic Congress (NDC) after the declaration of the 2020 Presidential Elections recruited and camped some people at the party’s headquarters so that they could fish out errors or infractions, adding that even though millions was spent on them, their report has not been made public.

Mr Mensah made this revelation as part of his criticism of the NDC’s handling of analysis it did on the presidential election results with respect to its petition at the Supreme Court.

He wondered why after extensive work on the presidential election results by a biostatistician that showed they were errors in the results. He questioned why the biostatistician was not made a witness in the petition before the Supreme Court.

“After the elections, you contracted a biostatistician to do some analysis on the election results for you.

He made several discoveries which featured in a viral video that got everyone questioning the integrity of the elections based how basic his presentation was.

Fast forward a few weeks later, you went to Court and the out of the 5 witnesses you chose to submit to the Court, none included the biostatistician who you contracted to work on the election results analysis.

Wait, I thought millions of cedis was spent camping people at the party HQ to do some work on the infractions on the 2020 election results?

Where is their output?

What did they find?

Where is their report?” He questioned in a post sighted by MyNewsGh.com.