Is Camping World Stock a Buy?

After peaking at the end of 2017, shares of Camping World (NYSE:CWH) have had a tough couple of years — that is, until the coronavirus blindsided the world. While the company took a hit in the first quarter of 2020, results have come back with a vengeance since then as the pandemic left its mark on American consumer behavior. While it would be easy to say this is a one-off tailwind for the RV retailer, that wouldn’t be completely fair.

A return to growth

In the nearly four years Camping World has been a public company, its revenue has remained on an overall positive trajectory. As reality set in over how fast it could grow, though, shares tumbled from a high of $48 in Dec. 2017 to finish 2019 at just shy of $15. 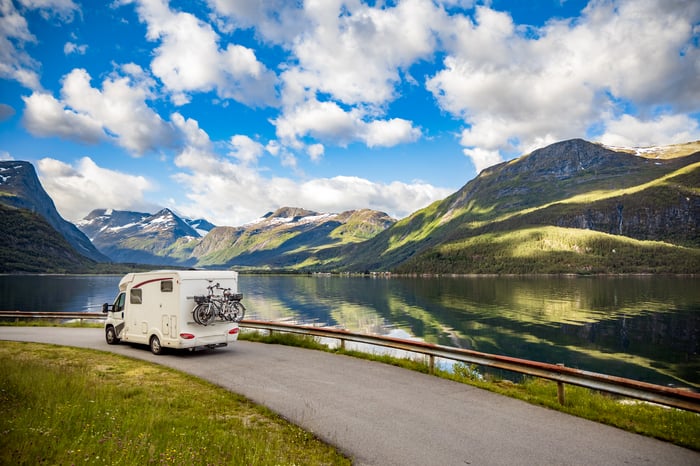 But after a brief tumble with the rest of the market in March, Camping World stock has been off to the races with a more than 110% rally in 2020 to date. After a 3.5% decline in revenue during the first quarter, the company handily topped expectations for the second quarter with 9% revenue growth and a big recovery on the bottom line.

All things considered, it’s been a pretty good year so far for Camping World as RV sales and related gear have been in high demand, and for good reason. Ordered to shelter in place and with some extra free time on their hands, many households have headed for the outdoors instead of staying cooped up.

RV sales are up 8% during the first half of 2020, and Camping World’s Good Sam subscriptions, which offer various discounts and perks, totaled nearly 2.1 million (and were good for $91.7 million in high margin revenue). And while this retailer is undeniably getting a sales bump from the pandemic, longer-term migration out of densely populated cities thanks to cloud computing and remote work could create a lasting tailwind here. The company has also been finding ways to slim down on costs through digitizing its operating processes.

But this company sees further opportunity to help households bring some of the indoors to the outdoors. It estimates some 11 million American households have an RV, and since it operates in just 36 states via 164 locations (and its website), there’s a possibility it can continue to expand its footprint with approximately eight to 10 new stores a year.

Of course, as is the case with all retail, this isn’t an incredibly high-margin business. The big rebound in the bottom line this year is great, but don’t expect similar performance in coming years. Nevertheless, Camping World has the ability to execute is plans with $228 million in cash and equivalents (excluding another $217 million it keeps on deposit to lower interest rates on its real estate). But with debt of $1.67 billion on the books, it’s hard to get too excited about this ever becoming an ultra-high-growth company.

I think the best of Camping World’s stock rally is now behind it, and there are better ways to play the retail space. But if the company can continue making progress on the bottom line, there might be some gas left in the tank.