Most impactful story of 2020, building on the golf boom 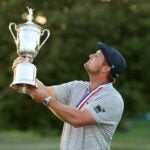 Bryson DeChambeau — how he changed his body and his game — was undoubtedly one of the biggest stories, in 2020 and beyond.

Check in every week for the unfiltered opinions of our writers and editors as they break down the hottest topics in the sport, and join the conversation by tweeting us @golf_com. This week, we discuss the year at large, golf’s popularity boom and what we hope to see in 2021.

It was a strange, challenging but ultimately successful golf year with many memorable and important stories emerging from all levels of the game. When you look back on 2020, which single story — from the professional or recreational ranks — do you think was most significant and/or impactful?

Sean Zak, senior editor (@sean_zak): It’s difficult to look beyond the game’s amateur resurgence. I’ve said this a bunch now, but it’s been delightful to realize how many more golf buddies I have now than I did a year ago. People who I had no idea were interested in the game were suddenly making tee times for me.

Josh Sens, senior writer (@joshsens): Golf being the first major sport to return to action was a big deal, for sure, especially in the way the Tour helped demonstrate that the game could be played responsibly and safely. But I’m with Sean on the amateur front. It was like something out of Revenge of the Nerds. The same friends and neighbors who used to scoff or roll their eyes when they heard me talking golf or saw me loading my sticks into the car suddenly started treating me like the cool kid on the block. What a great time to be a golfer. Now, if only my favorite local muni weren’t booked solid two months out.

Dylan Dethier, senior writer (@dylan_dethier): You guys are right in terms of the golf world at large. But in the professional world, Bryson DeChambeau’s transformation was the biggest story — not so much because of the specifics of his gains but because of the conversation it sparked. Bryson became for golf what Steph Curry was for basketball, sparking a revolution in strategy and analytics that’s changing the way other pros see the game. It’s just beginning.

Michael Bamberger, senior writer: The packed tee sheets at public courses, and private ones, too. All of golf’s health stems from the desire for people to play.

All of our market picks are independently selected and curated by the editorial team. If you buy a linked product, GOLF.COM may earn a fee. Pricing may vary.

Which golf story from 2020 didn’t get the attention it deserved?

Zak: The British Open not taking place. I know there are many monetary reasons and plenty of legitimate Covid speculation that kept it from happening, but it certainly was forgotten when the PGA of America, the USGA and the Masters all successfully held their majors. Then when the Women’s Open Championship delivers one of the best stories in years, it tends to look even worse.

Sens: Not that it got ignored, but I think it’s hard to overstate the growing role that gambling is starting to play in golf. We saw some of its influence this year in the growing popularity of gaming apps and office pools and assorted stats and graphics, as well as in tournament broadcasts that allow viewers to customize who they want to follow. Bigger waves are coming, which, depending on whom you ask, is either cause for celebration or concern.

Dethier: Jin Young Ko capturing the CME Group Tour Championship and the biggest check in the women’s game despite just four starts on the LPGA Tour in 2020 was quite the late-season flex for the world No. 1. She said she wanted to win enough money to buy a house — I hope she got the one she wanted!

Bamberger: The packed tee sheets at public courses, and private ones, too. All of golf’s health stems from the desire for people to play.

The surge in golf’s popularity in 2020 was undoubtedly a bright spot in an otherwise tough year; tee sheets were jammed and equipment flew off the shelves. What steps can the game take in 2021 to build on this momentum?

Zak: Make sure those jammed tee sheets don’t lead to six-hour rounds. 10-minute intervals! I know this is a niche detail, but many courses will respond to great demand by scrunching their tee times to 8-minute intervals and worsen the experience. Many of us would gladly grind to get up at dawn for a 3-hour round than enjoy our sleep and play 18 in 5.5 hours.

Dethier: This is an awesome suggestion. Just because you technically can get more golfers onto the course doesn’t mean you should! Nine minutes at the bare minimum.

Sens: Keep encouraging short courses, nine hole outings, alternative loops — anything that makes it easier to squeeze in some golf, any golf. For a lot of would-be golfers, the biggest impediment is time.

Dethier: Stay welcoming! Despite major strides in the right direction, golf still has a super-high barrier to entry. Every course should have a checklist to review to make sure it’s beginner-friendly: Do you have a clear, simple website? Do you have beginner-specific clinics or lessons available? When someone gets to the golf course, is it clear where to go from there? Is your staff receptive to answering questions and making everyone feel at home? Are there affordable options for rental clubs? All this little stuff goes a long way.

Bamberger: Even 10-minute intervals results in overcrowding and slow play. Shorter rough, shorter courses, play OB where it went out, play lost ball where you think you lost it and for god’s sake walk to your golf ball as best you can without interfering with others. Get your yardage and get your club in hand while somebody else is playing. Golf is a game of forward momentum.

IGF President Peter Dawson said in an interview this week that he would like to see a team golf competition at the Olympics, though there are no current plans in place for such a change. What would be the best way to structure a team format for Olympic golf?

Zak: The main issue, it seems, is that the PGA and LPGA tours are uninterested in taking multiple weeks off during peak season. That’s understandable, but we have to meet in the middle and just make a more efficient schedule. Sixty men and 60 women playing the same course on the same day for singles. Then after four days we have 32 doubles teams (16 men, 16 women) playing a match play tournament. You could get it all done in 11 days, hand out six gold medals and take a 3-year breath before having to do it again.

Sens: I personally wouldn’t miss the singles at all. We get plenty of individual golf competitions throughout the year already. Skip that part. Make it two-player teams. Make it a round-robin, as they do any number of Olympic sports.

Dethier: The fact that the Olympic golf competitions are just 72-hole stroke play tournaments is one of the most backwards, preposterous things in all of golf. It’s the Olympics! How do you not build in any of the intrigue that comes with a team competition, the stuff that makes the Ryder, Solheim and Presidents Cups so much fun? Some version of Sean’s tournament makes sense, but however it begins the event should end with doubles teams of men and women playing match play alternate-shot (or modified alt-shot) representing their country. This would be so much fun it’s crazy it hasn’t happened.

Bamberger: Completely agree with my distinguished colleagues above.

It’s that time again when we set goals for the coming year. Give the game an actionable resolution for 2021.

Zak: More middle ground between putt-putt courses and Pine Valley. More TopGolf, more mini golf on steroids, more courses with dynamic pricing and using their facilities for all kinds of play. Not just the standard, 4.5-hour round for four white dudes in their 40s. More middle ground golf.

Sens: Agreed on the above.  I’ve long wanted to see a public course try to stake out a claim as the fast-play course. If you can’t get around in 3:30 hours or so, maybe it’s not your place. You encourage a culture of quick play. You offer incentives for it to happen. You build a loyal audience along the way, and do many golfers a great service. I’ve suggested this to a few course operators over the years and they’ve scoffed at me, saying, ‘Do you realize how many customers I would alienate with that?” Maybe. But I wager that you’d gain for more players than you’d lose. Especially for any golf course that is struggling financially, why wouldn’t you try it? What would there be to lose?

Bamberger: More golf in public schools. More stories about women and minority golfers on all golf media. More effort to get young people to come to tournaments.

Now, it’s your turn: What’s your own personal golf resolution for ‘21?

Zak: Become that 6-handicap all my golf buddies swear I can become.

Sens: Stay healthy. I’ve been sidelined for six months with a bum shoulder. Golf might be 90 percent mental, but if you’re not physically able, no amount of mental strength will get you around.

Dethier: Pick up some speed! And get back into some regular practice schedule. Now that I’ve moved from New York City I have no excuse not to practice my game more than once-per-work-trip. Also, win the U.S. Open.

Bamberger: Never say no to an invitation to go golfing.

Zak: Can’t wait to hold you to that, Michael.